On Thanksgiving, Americans are supposed to reflect on the many blessings that they’re grateful for. In this article we’ll cover some interesting facts and traditions surrounding Thanksgiving in America. 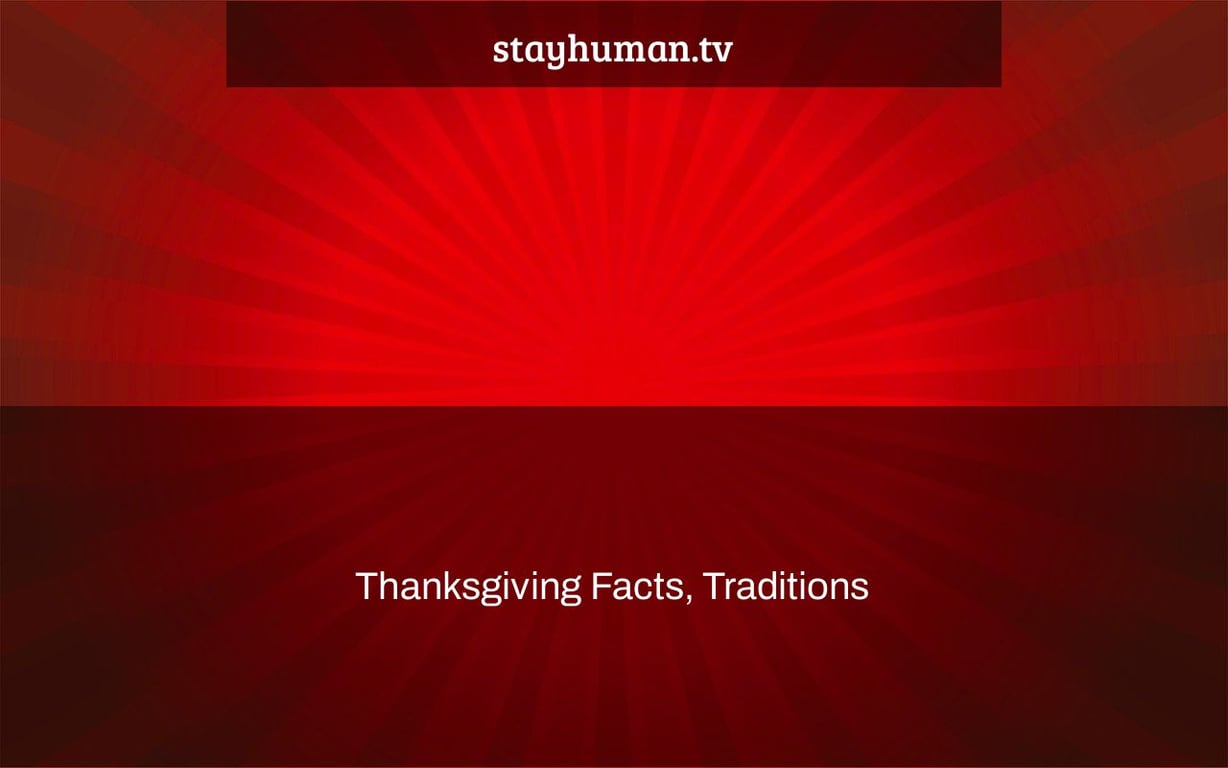 Abraham Lincoln established a National Day of Thanksgiving on the final Thursday of November in 1863. Under President Franklin D. Roosevelt, the fourth Thursday in November was declared a legal holiday by Congress in 1941.

About fifty Pilgrims and ninety Wampanoag Indians attended the Pilgrims’ “Thanksgiving” ceremony. The Indians were not specifically invited, but they arrived to see what the party was all about and were let in.

The Pilgrims were devout Christians, and if Thanksgiving had been a religious festival, the Indians (non-Christians) would not have been allowed to participate. A religious festival would have mostly consisted of all-day prayer rather than celebration.

Rather than the turkey, stuffing, sweet potatoes, cranberries, and other traditional Thanksgiving fare, the original Thanksgiving dinner was likely to include duck, deer, fish, lobster, clams, berries, fruit, pumpkin, and squash. Because the pilgrims were unprepared for baking and lacked access to butter and other ingredients, pies were not served during the first Thanksgiving.

Many families like ‘Turducken,’ which consists of deboned turkey, duck, and chicken nested within one other and then fried.

The extended four-day weekend, which begins on Thursday and ends on Friday for white-collar professionals, is a popular time for relatives to get together — the Saturday following Thanksgiving is typically a time for high school, college, or local reunions.

Many people blame the turkey for their post-meal lethargy, but it’s more likely that the trimmings, carbohydrate-rich sides, and sweets, which enable tryptophan into the body, are to blame.

The night before St. Patrick’s Day is really one of the busiest evenings of the year for bars and nightclubs, equal and occasionally exceeding St. Patrick’s Day in terms of alcoholic beverage consumption. Regrettably, this adds to the figures that show an increase in US fatalities around Thanksgiving.

Pre-meal snacks, the children’s table, NFL football with traditional rivals, radio stations beginning to play Christmas music, The Macy’s Thanksgiving Day Parade (televised nationwide), The Dunkin Donuts Parade (in Philadelphia, a continuation of the first Turkey Day Parade, which began in Philadelphia in 1920) – the Parade is also the official introduction of Santa Clause for the Holiday Season.

Making a wish — breaking the wishbone of the bird, usually between a senior and younger member of the family – is another practice.

Families often use this time together to enjoy indoor and outdoor activities and establish Christmas preparations. It is a common time to ‘get to know’ other family members without of the distractions of television. It’s always a good idea to brush up on your family tree.

Thanksgiving also serves as a lead-up to Black Friday, which is one of the busiest shopping days of the year – and the day when retailers (hopefully) earn a considerable profit.

Politics, religion, and family gossip are topics best avoided on this day.

The traditional Thanksgiving joke: A woman was looking among the frozen turkeys at the supermarket but couldn’t locate one large enough for her family. ‘Do these turkeys grow much bigger?’ she inquired of a stock guy.

The “thanksgiving dark history” is a term that describes the dark side of Thanksgiving. The holiday has a number of different traditions and trivia associated with it.

What are typical Thanksgiving traditions?

A: The typical Thanksgiving tradition is the 23rd of November. It celebrates the Pilgrims arrival in New England and it is a time when families gather together to share food, drink, talk with one another and give thanks for their blessings.

What are 4 Thanksgiving traditions?

A: These are 4 Thanksgiving traditions, 1) Making sure your turkey is thawed and ready for cooking 2) Putting out the table 3) Dressing up in fancy clothes 4) Eating a lot of food.

What are 10 interesting facts about Thanksgiving?

A:
– The United States Thanksgiving was the first national holiday in America.
– George Washington, who served as President of the United States from 1789 to 1797, proclaimed a day of thanksgiving on April 30th of each year.
– In 1966 Congress declared that Turkey would be substituted for chicken at this time instead.
– The tradition and celebration has been found throughout every culture around the world even though it originated with only one nations history.

Living Life On The Fast Lane

Latest Netflix Inclusion and What To Know Before Watching?